Productivity is becoming more and more important in our lives. We want to get more done, make more money, be more in control, and have more time to spend with our friends and family.

No doubt, if you want all these things, you have to be more productive.

The easiest way to do it is, of course, to build better habits and get rid of the time-wasting ones. But there are so many habits that seemingly affect our productivity. Where would you even start?

I work with many people 1-on-1 on improving their productivity. And by far the most common habit that people want to work on is waking up early.

There is so much hype around it lately that it’s perceived almost like a superpower.

Most people think that once you start getting up early you become an unstoppable productivity machine and nothing can slow you down.

But is it just hype, or does it actually work?

More importantly, is it going to work for you?

Let’s look at some of the positives of waking up early that made it such a popular trend.

If you read books or articles from early risers, you’ll find every one of them reporting tons of amazing benefits.

Also, the plethora of waking up early quotes doesn’t make it easier to question it either…

“It is well to be up before daybreak, for such habits contribute to health, wealth, and wisdom.”

“I never knew a man come to greatness or eminence who lay abed late in the morning.”

“Early to bed and early to rise makes a man healthy, wealthy and wise.”

I mean, Jesus… is there a famous dead person who didn’t write a brilliant quote about waking up early?

Anyway, let’s get back to the real, practical reasons for waking up early and see if those apply to you.

This one makes sense right? Wake up two hours earlier and you’ll add two more hours to your day.

C’mon… how could that much extra time not make you more productive?

Okay, why are you waking up earlier in the first place? To be more productive right? Right!

But wait, what happens to those 2 hours of sleep that you were getting before?

You end up with 2 fewer hours of sleep every day, which leads to sleep deprivation.

And you know what is terrible for productivity? That’s right — sleep deprivation. It dramatically reduces your focus and ability to perform.

So what’s the whole point of getting 2 extra hours if you’re going to be delirious the whole day? If you’re sleep deprived, you’ll end up wasting not only those 2 hours but the rest of the day as well.

2. Wake Up Before Everybody Else

Another logical argument — get up before everybody else and you can get a ton of stuff done before they’re even awake.

You can also start the day on your own terms. Not get distracted by other people’s agenda, because they’re still asleep.

This one makes a lot of sense. It’s all about avoiding distractions from other people.

If you wake up late, everybody else is awake already and they start bugging you. You have to rush for work. Your boss gives you tasks. Your kids need attention.

Whatever it is, you don’t have the time to focus on yourself and make yourself strong.

If you control your own schedule none of these benefits apply to you.

In that case, you can start your day late and avoid the morning traffic. You can do your shopping when there are fewer people in the store. Or go to the gym in the afternoon, instead of the morning when it’s crowded.

So this benefit only matters if the early morning is the only time when you can avoid distractions from other people.

We’ve all heard of this one — willpower is a limited resource. A resource that is replenished with sleep. Every morning when we wake-up we’ve got a full tank.

As we go through our day and make decisions or work on tasks we spend willpower. As the day goes on the more we lose the ability to make good decisions or stay focused.

It’s a good idea to wake up early so you can work on the important things first, while your willpower tank is still full.

This one makes sense only for people who start work early and come back from work exhausted — low on willpower.

In that case, it helps to wake up early and focus on yourself first. It’s the only option really because you don’t have the willpower to do it after the work in the office is done.

But again, if you’re not constrained by an exhausting job schedule, it wouldn’t make a difference if you wake up early or not.

Also, have you considered that you need willpower to become an early riser in the first place?

If you’ve been a night owl all your life, learning to wake up early is going to take time and effort. It’s not something that you get for free so “you might as well do it anyway”.

Don’t put the time and effort to become an early riser unless you get a real benefit out of it.

You know those days when you oversleep and feel terrible when you wake up? And I’m not talking about feeling guilty, but physically terrible. The grogginess seems to last for hours and you can’t get anything done.

So why sleep so much in the first place? Just wake up early and avoid the grogginess instead.

We’ve all had those episodes when we oversleep and feel terrible when we wake up. It seems like getting less sleep and waking up early is a good idea.

But more sleep isn’t what is making you groggy. The lack of consistency is.

But if you wake up in the middle of a deep sleep cycle you’ll be groggy as hell.

Our bodies are pretty good at adjusting the cycles if we have a consistent schedule. If you wake up at the same time for a week or two, your body will adjust and you will be in a light sleep cycle when your alarm goes off.

But if your sleep is all over the place, your body will have a tough time getting used to it. So you will often wake up in the middle of a deep sleep cycle and feel groggy.

It’s not the extra sleep that made your morning time harder but the lack of consistency.

This is the best one yet — If you get to work before everybody else, you will be done early. You can go home earlier and spend the whole afternoon at the bar with friends, or at home playing with your kids.

It’s much better than starting late and work in the office until midnight, right?

Before you commit to that early schedule think of the sacrifice that you’ll be making in the evenings. As we said, if you want to be productive you have to get enough sleep every day. Which means, an early wake-up time equals an early bedtime.

So yes, you wake-up 2 hrs before everybody else, but you also have to be in bed 2 hrs earlier too.

That automatically rules you out for most evening events. If most of your friends work late and go out in the evenings, your social life will be kinda messed up.

You’ll have to pass up most invitations because it’s after your bedtime.

Oh and also, when you do make an exception and stay up late, you’ll be sleepy as hell. Your body will be trained to put you to sleep at 8:30 PM, which is probably when your friends get off work.

So before you commit to that early sleep schedule, think about the sacrifices you have to make.

What Actually Makes You Productive

The time of your wake-up isn’t directly related to your productivity. Here is what will actually make a difference.

The amount of sleep is directly related to how focused and disciplined you will be throughout the day. There are many studies proving how bad sleep deprivation is for performance.

But even if you ignore the studies, just look at your own past experience.

You can get a ton of work done if you’re focused and alert. Compare that with being sleepy and distracted all day long, but you have 2 extra hours in the day because you woke up early.

Who cares about the 2 extra hours if you’re going to spend them drooling on your desk, not being able to keep your eyes open?

Another thing that is critical for your productivity is how much your wake-up/bedtime changes from day to day.

Our bodies are not designed to work well when our sleep is all over the place.

That’s why jetlag is so hard to adjust to.

The more often you change your sleep schedule, the poorer your sleep quality will be. And the poorer the quality is the more hours of sleep you’ll have to get just to compensate.

So instead of worrying about making the wake-up time earlier, focus on making it more consistent.

If you train your body to be up and running at the same time every day, you will get that energy and focus every morning.

Also, the more you get used to the consistent schedule the more organized you will be. You will get used to the routine and you’ll be able to predict how much time everything takes. You won’t have to “wing it” every time, which is a recipe for disorganization.

Consistency is what makes you more organized, not waking up early.

How Are You Using Your Mornings?

Which one of these two are you more likely to do?

The second scenario is always going to be much more productive, regardless of when you woke up.

The key to having a productive start of the day is not to get more hours. It’s to utilize the time effectively.

Waking up early and wasting that morning time makes you less productive. If you do that, it’s much better to get some extra sleep instead.

The Ability to Control Your Sleep Schedule

Getting enough sleep, having a consistent sleep schedule, and a productive morning routine are all great habits. You will be much more productive if you nail those.

But doing it once and hoping that it will stay that way forever isn’t realistic.

We live in dynamic times. Our responsibilities and goals change constantly. Creating a good sleep schedule just once isn’t going to cut it.

You have to learn the skill of controlling your sleep schedule and do it again when things change.

Here are a few things that typically throw people off:

So when you’re working on creating your good sleeping and morning routine habits — think long term.

Create a checklist of what works for you and what doesn’t. Come up with a strategy that you can implement every time your sleep schedule is messed up, so you can easily get back on track.

Here are a few strategies that always work for me:

To Become More Productive, Focus On What Matters

The whole point of this habit is to make you more productive. But don’t fall into the trap of thinking that waking up early will directly help you get more done.

Don’t believe in myths like cutting your sleep for the sake of getting more hours in the day.

The tips above work great for me. I’ve also tested them with more than a 1,000 people that I’ve coached.

But just because something works for others doesn’t mean it will work for you.

Test it yourself and measure your results. It’s the only true way you will become more productive. 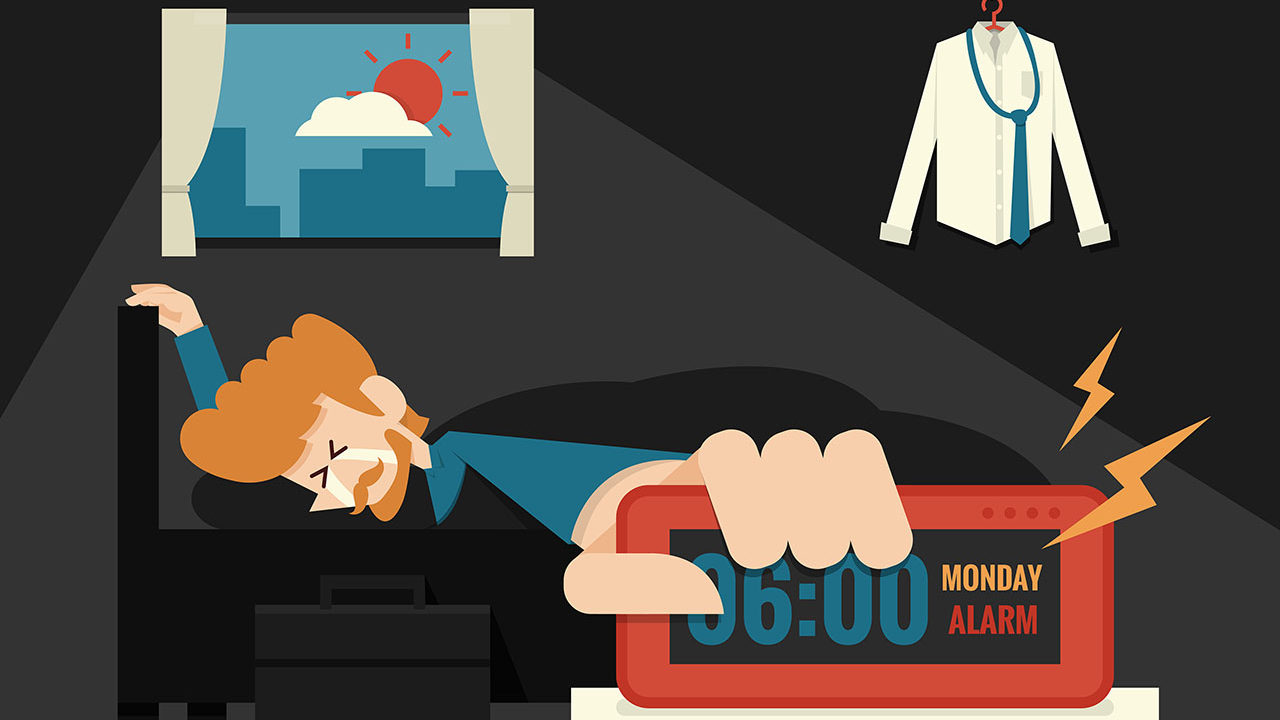